Easigrass brought a touch of grass to the party at Ibiza Rocks Hotel, one of the Balearic Islands’ most famous poolside live music venues. More than 700m2 of Easi-Knightsbridge grass was installed around the pool, throughout the VIP lounge and balcony areas of the iconic hotel music venue, which attracts some of the world’s most popular music acts to its stage.

“Initially it was only going to be the VIP area and the upstairs arena, but as they liked it so much, they decided to increase the area poolside,”

said Andy Edwards of Easigrass Ibiza. “The first area we did was the VIP pool area, followed by the upstairs balcony arena a few weeks later, then finally the large area directly in front of the pool. The grass used was Knightsbridge, as it’s a great looking grass and fairly robust and at a very economical price.”

Easigrass Ibiza started in 2013, and has since completed more than 300 installations on the island, from high-end villas, football pitches, bars, restaurants, clubs and children’s playgrounds, to family gardens. Across the world, Easigrass specialises in bespoke design and service, from large commercial projects to small garden areas.

Artificial grass is extremely versatile in terms of application and can be used to transform any indoor or outdoor space in any climate. The Easigrass UV-stabilised range of grass can be fitted on any concrete, tarmac or decking surface. 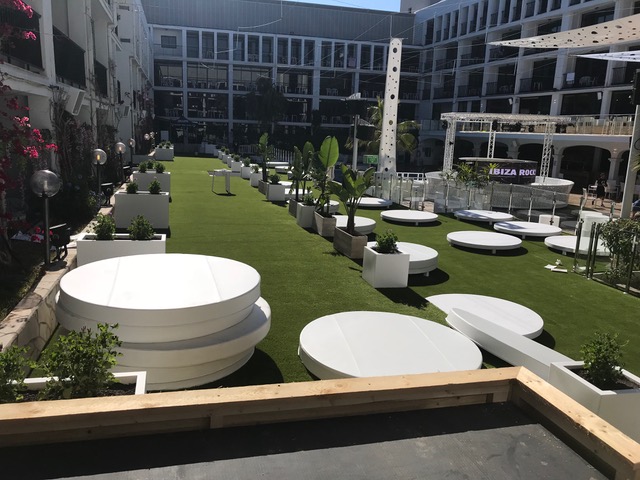